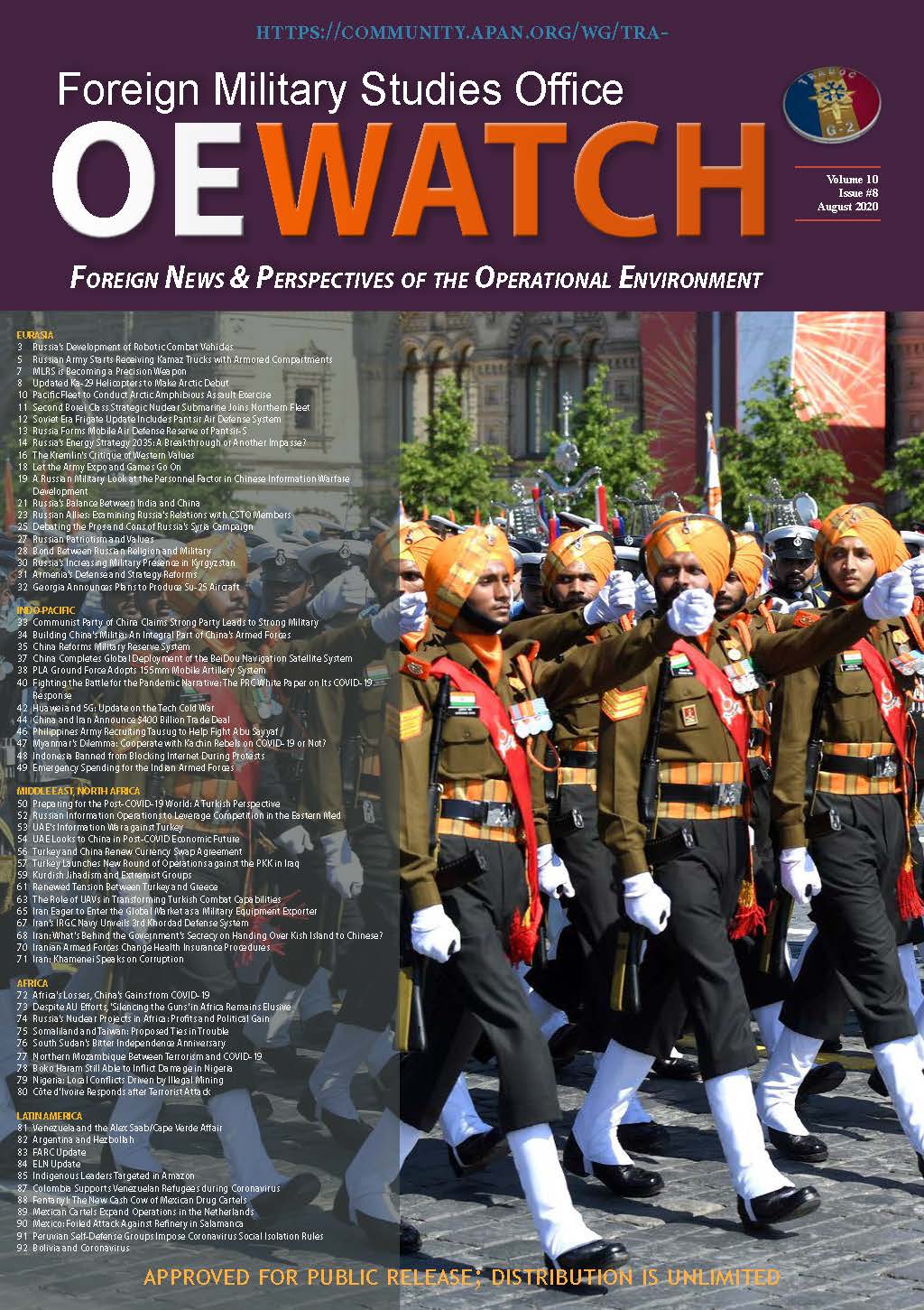 The August issue of OE Watch continues to feature foreign perspectives on the OE, particularly on how Russia and China are leveraging emerging technologies and foreign presence to exploit opportunities, as well as a variety of topics related to COVID-19 and security affairs.

In the Eurasia section, Russian military advances to note include their development of robotic combat vehicles (“Russia’s Development of Robotic Combat Vehicles”) and the transformation of multiple launch rocket systems (MLRS) into precision weapons as they will now be equipped with precision guided munitions (“MLRS is Becoming a Precision Weapon”). The issue also features a look at Russia’s Energy Strategy into 2035, focused on the country’s fuel and energy complex as a central pillar of Russia’s economy in the coming decade (“Russia’s Energy Strategy 2035: A Breakthrough or Another Impasse?”). Another noteworthy article provides a Russian perspective on China’s approach to information warfare development, particularly how the Chinese develop and train their personnel to achieve “superiority in the information domain” (“A Russian Military Look at the Personnel Factor in Chinese Information Warfare Development”).

The Indo-Pacific section considers structural reforms in the Chinese military from Chinese perspectives (“Building China’s Militia: An Integral Part of China’s Armed Forces”; “China Reforms Military Reserve System”). One article looks at how the Chinese Communist Party aims to strengthen the PLA through strengthening the Communist Party itself and by ensuring that Marxism is digested across all levels of the party (“Communist Party of China Claims Strong Party Leads to Strong Military”). Meanwhile, China is working diligently to control and shape the pandemic narrative (“Fighting the Battle for the Pandemic Narrative: The PRC White Paper on Its COVID-19 Response”).

The Middle East, North Africa section has a strong emphasis on the new regional powers trying to shape the neighborhood: Iran and Turkey. The section opens with a Turkish perspective on how to prepare for the post-COVID-19 world (“Preparing for the Post-COVID-19 World: A Turkish Perspective”), followed by several articles on Turkey, including one on how UAVs have transformed the country’s combat capabilities (“The Role of UAVs in Transforming Turkish Combat Capabilities”). Iran is eager to enter the global market as a military exporter (“Iran Eager to Enter the Global Market as a Military Equipment Exporter”) amid its unveiling of a new defense system (“Iran’s IRGC Navy Unveils 3rd Khordad Defense System”). Two articles look at the information operations of Russia and the UAE in the region (“Russian Information Operations to Leverage Competition in the Eastern Med”; “UAE’s Information War against Turkey”).

This issue of OE Watch features 66 articles covering various security challenges from the foreign perspective from over 30 different countries and regions around the globe.

It can be found at FMSO’s website: https://community.apan.org/wg/tradoc-g2/fmso/. All of FMSO’s books, studies, and OE Watch issues are there.