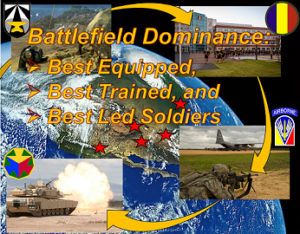 [Editor’s Note:  As previously noted on the Mad Scientist Laboratory, U.S. battlefield dominance over the past thirty years has been sustained by three heretofore unchallenged pillars:  1) We have the best equipped Army in the world; 2) We have the best trained Soldiers and the most dynamic leaders; and 3) Our ability to conduct maneuver warfare is unmatched.  This dominance rested on efforts the U.S. Army (and its Sister Services) have made across Doctrine, Organization, Training, Materiel, Leadership and education, Personnel, Facilities, and Policy (DOTMLPF-P).  We know that any technological advantages in the materiel domain will be fleeting.  Additionally, we know that our adversaries are exploring ways to sidestep U.S. conventional dominance in fields cheaper to cultivate and maintain — cyber, information, and artificial intelligence among them — buying time and perhaps rendering battlefield superiority unnecessary.   But what if an adversary “steals a leaf from our playbook” and starts to modernize across the DOTMLPF-P as well?  Read today’s guest blog post by Dr. Jacob Barton, senior contract intelligence analyst, TRADOC G-2, to learn how China’s People’s Liberation Army (PLA) is doing just that in its endeavor to secure the Chinese Dream!]

Read the entire article on the Mad Sci Blog