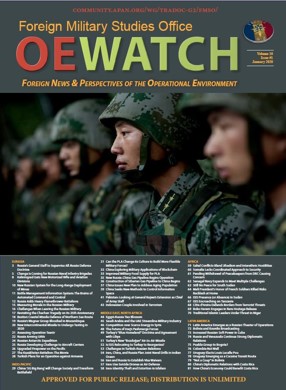 This issue of OE Watch continues to see Russian sources pointing to the General Staff and doctrine development, specifically at an upcoming decree that would give the General Staff a supervisory role among an expanded set of government institutions in coordinating national concepts and doctrine for the total security of the state (“Russia’s General Staff to Supervise All-Russia Defense Doctrine”). This issue also includes several articles on Russian military reforms (“Change is Coming for Russian Naval Infantry Brigades”; “Kaliningrad Gets New Motorized Rifle and Aviation Divisions”; “Russia Adds Heavy Flamethrower Battalions”) in addition to the traditional coverage of developments in Russian military technology (“New Russian System for the Long-Range Deployment of Mines”; “Battle Management Information System: The Brains of Automated Command and Control”; “New Intercontinental Missile to Undergo Testing in 2020”).

The Chinese military continues to debate how to make its military more flexible, efficient and innovative (“Can the PLA Change its Culture to Build More Flexible Military Forces?”). One article looks at how 5G will transform the battlefield by leading to an improved “intelligentization of the future battlefield” (“China: ‘5G Big Bang’ will Change Society and Transform Battlefield”). China also continues to work on cutting edge technologies, including researching blockchain as an emerging technology with a potentially disruptive influence on the military (“China Exploring Military Applications of Blockchain”). Meanwhile, the Chinese government appears to be taking a more proactive approach to control the information domain (“China Seeks New Methods to Control Information Space”).

The Middle East/North Africa and Africa sections include several perspectives from regional sources on how ISIS may be adapting to its loss in Iraq and Syria (“Is ISIS Relocating to Turkey to Reorganize?”; “ISIS

This issue of OE Watch features 63 articles covering various security challenges from the foreign perspective from over thirty different countries and regions around the globe.  It can be found at FMSO’s new website: https://community.apan.org/wg/tradoc-g2/fmso/. All of FMSO’s books, studies, and OE Watch issues are there.

This particular issue can be downloaded directly at https://community.apan.org/wg/tradoc-g2/fmso/m/oe-watch-past-issues/307562/download.