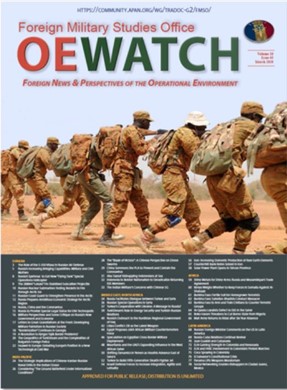 This issue of OE Watch looks at how Russia is investing heavily in and incorporating emerging technologies in deterrence, anti-access and area denial  (“The Role of the S-350 Vityaz in Russian Air Defense”) as well as direct/indirect fire (“The 3BM44 ‘Lekalo’ Fin-Stabilized Subcaliber Projectile”; “Russia’s Spetsnaz to Get New ‘Flying Tank’ Special Operations Helicopter”).  Meanwhile, Russia is increasing is military power in the Arctic (“Russian Coast Guard to Strengthen Presence in the Arctic” and “Russian Nuclear Submarines Testing Rockets to Fire Through Arctic Ice”).

As part of its Arctic strategy until 2035, Russia is also considering economic benefits to businesses willing to engage in projects in the region (“Russia Prepares Ambitious Economic Strategy for Arctic Region”).

The March issue also notes discussions on the possibility of competing collective security pacts (“The Strategic Implications of Chinese-Iranian-Russian Naval Drills in the Indian Ocean”).  China continues to study how to adopt new technologies into their warfare strategies andtactics (“Considering ‘The Ground Battlefield Under Informatized Conditions'”) as well as how artificial intelligence will shape the future battlefield (“The ‘Blade of Victory’: A Chinese Perspective on Drone Swarms”).  Chinese 5G is causing concern and prompting debates about a potential new ‘technological Cold War’ (“The Indian Military’s Concerns with Chinese 5G”; “Huawei in Europe: Debating Europe’s Position in a New Technological Cold War”).

In the Middle East/North Africa, recent developments in both Syria and Libya are testing the limits of the Turkey-Russia relationship (“Russian Special Operations in Syria”; “Turkey’s Cooperation with Ukraine: A Message to Russia?” “Russia’s Outreach to the Kurdistan Regional Government of Iraq”).

Force”) like the one in Yemen (“Shifting Dynamics in Yemen as Houthis Advance East of Sana’a”).

The Africa section features discussions on the challenges posed by radical groups (“Kenya Weighs Whether to Keep Forces in Somalia Against Al-Shabaab”; “Al-Qaeda Loyalists Defect to ISIS in the Sahel”; “Boko Haram Threatens to Cut Borno State from Nigeria”) while the Latin America section highlights the activities of drug cartels and transnational criminal organizations (“ELN Gaining Strength in Colombia and Venezuela”; “ELN and FARC Involvement in Colombia’s Protest Marches”), reminding us that they remain capable threats as well.

This issue of OE Watch features 54 articles covering various security challenges from the foreign perspective from over thirty different countries and regions around the globe. It can be found at FMSO’s website: https://community.apan.org/wg/tradoc-g2/fmso/.  All of FMSO’s books, studies, and OE Watch issues are there.

This particular issue can be downloaded directly at https://community.apan.org/wg/tradoc-g2/fmso/m/oe-watch-past-issues/320025/download.