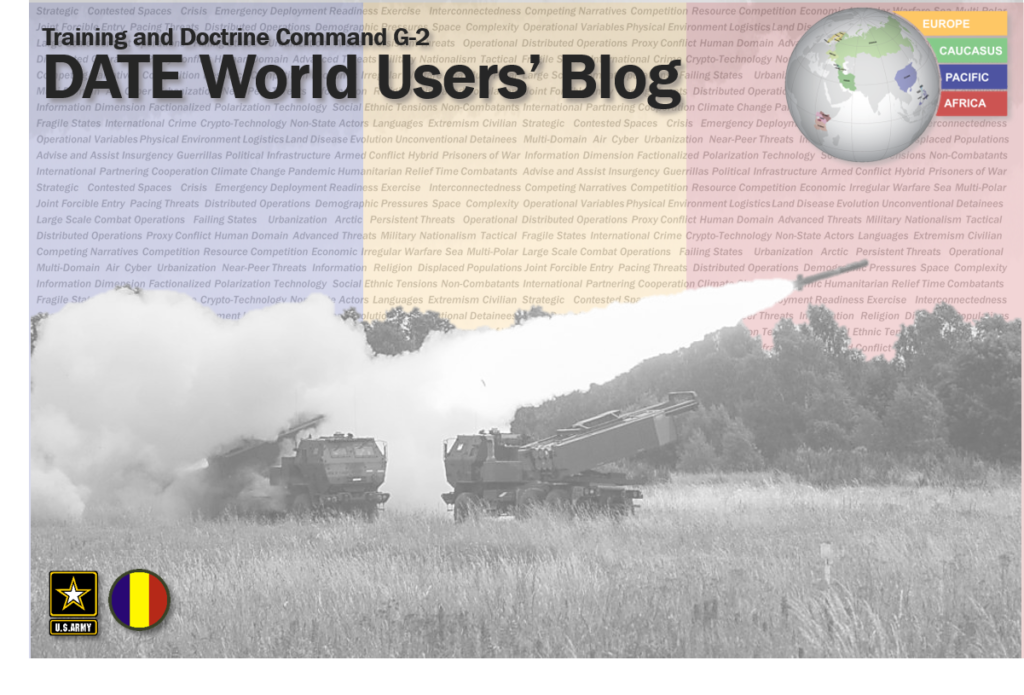 Before psychoanalyzing the poor folks in S3 any further, it’s worth asking yourself the question: What is a DATE World?

As it turns out your S3 may not actually be living there, just spending enough time in South Torbia to consider investing in a time-share. And it’s not limited to just your battalion S3; these days, many U.S. Army units and their leaders spend months at a time in the imaginary principalities of Framland and Otso.  But that doesn’t mean you should google the the Overseas Housing Allowance for Gabal. Instead, you should take a moment to understand what “DATE World” is, and how it came to be.

The acronym “DATE” stands for Decisive Action Training Environment. DATE World is the U.S. Army’s official training environment. It provides the Army training community with a singular, unified, scalable training environment that facilitates training scenarios across live, virtual, and constructive events. It’s complicated, we know, but words have meaning after all and environment ≠ scenario (be sure to read this portion aloud in the most condescending manner, lest anyone forget that words have meaning). DATE World is the environment within which any theoretical scenario may take place.  Therefore DATE World is not a scenario…it’s simply the imaginary place where training scenarios transpire.

If you’re like me, you don’t have the mental bandwidth to remember where you put your wallet on a given day, much less the names and political histories of made-up countries. So why not use real-world countries and environments to train U.S. Army units?

First, DATE World is designed to be dynamic where the real-world cannot and it’s scalable and adaptive to the needs of a training unit. Training for stability operations with an irregular adversary? DATE World replicates those conditions in each of its four environments. Training for Great Power Competition, including conflict against a capable adversary? DATE can replicate that too. By design, DATE provides training units with a sliding scale of threats, adversaries, and other environmental variables that can be tailored in scenario development to fit a specific training objective. Real-world environments are constrained by, well, reality, which may not provide adequate training outcomes without modification of its own.

The second reason we use fictitious countries, and the same reason I had to wash my parents’ cars as a kid: because “they said so.”  AR 350-2 prohibits units from using real-world countries, state, and non-state actors portrayed as ‘enemies’ in unclassified scenarios. Unless the United States is currently “in conflict” with the portrayed enemy, real-world adversaries may only be used in classified exercises. International-relation sensitivities, multi-national training considerations, and the risks of exercise scenario and real-world confusion are all perfectly valid reasons why the Army would constrain the use of real-world countries in training.

Ok…but what IS DATE World?

DATE World is comprised of four different geographic regions; Caucasus, Europe, Africa, and the Pacific. Apart from constraints imposed by physical geography, a scenario developer should be able to facilitate literally any scenario in any of the four regions, because the tools are all provided.  There are a number of hypothetical adversaries included in each of the DATE regions, state and non-state, regular and irregular, but none are inherently in a state of armed conflict. DATE provides the tensions and the background for potential conflict, but scenario developers are responsible for putting the final touches in place to facilitate specific training needs.  If a training event were a Bob Ross painting, DATE World would be the mountains in the background, the river, and maybe the general outline of a forest in the middle-distance; scenario developers need only to add a few happy trees in the foreground to finish the job.

Though it certainly would be fun to make everything up (and easier too), each condition and adversary programmed into DATE World is informed and validated by real-world intelligence community assessments.

The training environment also includes any potential groups and countries Army units could face, based on the modernization efforts, capabilities, and strategic intent of our real world adversaries. Some may suggest that a make-believe adversary is not relevant to real-world missions, but because the whole environment is intelligence-informed, ‘that’s just like [their] opinion, man.’

Another characteristic of DATE World is its centralized control and maintenance of the content itself, under the proponency of TRADOC G2. The directed control and maintenance ensures the framework stays consistent and up-to-date with emerging threats and trends for training units across the Army’s training enterprise.  It also allows for wide-spread, simultaneous use across multiple units, and throughout the professional military education system, often working in the same scenario (more on this in a future blog post). The community of use extends beyond the U.S. Army, and includes the Joint and Multinational partners, which counts the United Kingdom, Australia, Canada, and New Zealand as DATE World users. There is no doubt, training Army units into the future will become increasingly multi-echelon, multi-service, and multi-national to meet the demands of large-scale ground combat operations in the twenty-first century. The professionalized common framework that DATE provides will be essential to the multi-faceted future of Army training.

If we lost you in the Army buzz-word-forest, you should pull up from the flat spin now before Goose gets hurt.  Just remember that DATE World isn’t static, that training units must apply the generalized, pre-made operational variables to a specific scenario that suits their individual training objectives.

You likely have more questions now than you did five minutes ago, and that’s ok.  Go ahead and drop them in the comments below. We’ll work to address those and others in future blog posts where we’ll talk a lot more about DATE World countries and adversaries, and the different ways training units and scenario developers can leverage the available tools in each DATE region. There will also be posts about emerging DATE World developments, and where we think the training environment might go in the future.

That’s it for now.

Feel free use the comment box below to provide feedback, or if you have a DATE topic burning a hole in your notebook you can send an email to oetadirectorate@army.mil and we will get back in touch about your guest contribution.

Join our Team on Army 365: DATE World Community of Practice