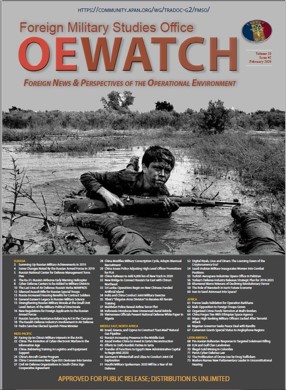 This issue of OE Watch opens with a look at some of what Russians are touting as their military accomplishments in 2019 (“Summing Up Russian Military Achievements in 2019” and “Some Changes in the Russian Armed Forces in 2019”).  Looking ahead, the Russian Armed Forces are modernizing their special purpose firearms (“Silenced Assault Rifle for Russian Special Troops”), improving their air defenses (“The Ka-31: Russia’s Airborne Early Warning Helicopter”; “The Last Line of Air Defense: Russia’s Verba MANPADS”), and focusing on cyber defense and “network-centric warfare” (“Cyber Defense Centers Will Appear in Military Districts”).  The issue also continues the discussion on reforms in the Russian military, with a few that are derived from Soviet-era practices, particularly the idea of reinstituting the Main Military-Political Directorate (“Strengthening Russian Military Morale at the Small Unit Level: Return of the Military-Political Directorate” and “defense secrets”  (“Some Changes Noted by the Russian Armed Forces in 2019”).

The Middle East North Africa section contains multiple, regional articles covering both the situation in Syria (“Efforts to Unify Kurdish Parties in Syria”; “Assad Invites China to Invest in Syria’s Reconstruction”) and emerging challenges in the Eastern Mediterranean and Libya (“Israel, Greece and Cyprus to Construct ‘East-Med’ Natural Gas Pipeline”; “Germany’s Wintershall and Libya to Conduct Joint Oil Exploration”).   Meanwhile, Saudi Arabia, the UAE, Syria, Yemen and possibly Tunisia are looking to adopt digital currencies (“Digital Riyals, Liras and Dinars: The Looming Dawn of the Cryptocurrency Era?”) and Egypt is preparing to transfer functions to its New Administrative Capital, envisioned as a modern and efficient “smart city” in eastern Cairo.

This issue of OE Watch features 57 articles covering various security challenges from the foreign perspective from over thirty different countries and regions around the globe.  It can be found at FMSO’s new website: https://community.apan.org/wg/tradoc-g2/fmso/.  All of FMSO’s books, studies, and OE Watch issues are there.

This particular issue can be downloaded directly at https://community.apan.org/wg/tradoc-g2/fmso/m/oe-watch-past-issues/310925/download.